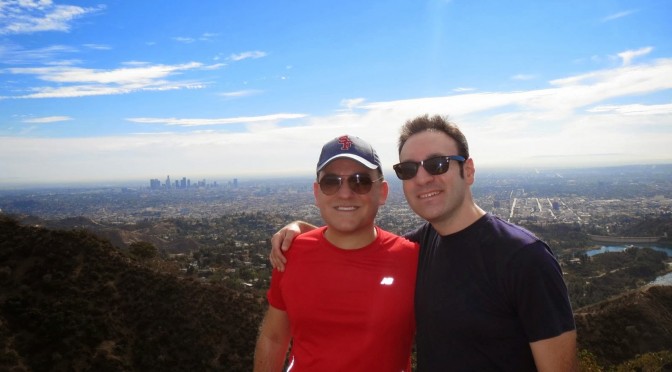 This morning, Larry & I met up with the gang (this time, it was Nicki, Brian, George, Rob & Jamal) to do some hiking!  Nicki had warned us that it would be a more difficult hike than our previous one in November (which is when we hiked in the Santa Monica Mountains along the Mandeville Canyon trail – I have pics but they weren’t posted as that was during my lazyass posting phase) and she was NOT lying.

We met along Lake Hollywood Drive, at which point you park and then hike up a little road to the trailhead.  We didn’t do what it looks like most people do, which is take on the direct path to the top of the trail at a place called Wisdom Tree; instead, we went along the mountains to the San Fernando Valley side first, getting great views of Universal City and Burbank.   The hike had been along a decently-wide trail but at a point where you’re looking right out at NBC Burbank and Warner Bros, our path turned vertical.  Yep, it was time to hike up the mountains so we could approach Wisdom Tree from the back.  Despite it being more than what Larry & I had bargained for, the effort was well worth it.   As we progressed ever higher up the mountain, the views of the Valley were amazing.  It being Sunday, the smog was pretty much minimal and in fact, the whole area was pretty damn clear.  It did get annoying as we’d hit what seemed like a summit only to find yet another peak to climb.  Even though our elevation was only about 1600 feet at the max, it was a rapid elevation and pretty tiring.  Yet when we got to that last summit and hit the ridge that allowed you to see all of Los Angeles (non-valley), it was invigorating and all worthwhile.  I’ve put all my pictures up and Google/Picasaweb was nice enough to automatically stitch my attempts at panoramic photos for me!  Take a look:

So yeah, it was awesome and the weather really cooperated.  Here’s the whole suite of pics below though, just in case you want to see some more action shots and more of the harrowing journey we embarked upon!

Hollywood Reservoir, not our trail

The path uphill to the actual trail

I think you still could get there

Downtown LA on a cloudy Sunday

Universal City in the distance

The trail over to the valley was fairly easy

When we realized this was going to be work

The end of the flat trail

Trying to give perspective

Larry puts on his game face

Waving from up above

Nowhere near the top

Yep, we were going to the top

The view kept getting better the higher we went

We had a lot more up to go

Reaching the top on the valley side

Brian and Rob during a break

Larry expects there to be an end to this soon

Our ultimate destination, the Wisdom Tree

Yet another hill to climb still

Nicki, Queen of the Valley

We made it to the Hollywood side

Spectacular views of the Southland from here

Larry & Me on top of the world

The Hollywood Sign is right below that antenna, but not visible

The Wisdom Tree is still ahead

Looking down into Hollywood

The Wisdom Tree up close

Griffith Park and DTLA are visible

The plaque at the trailhead

We clambered down that