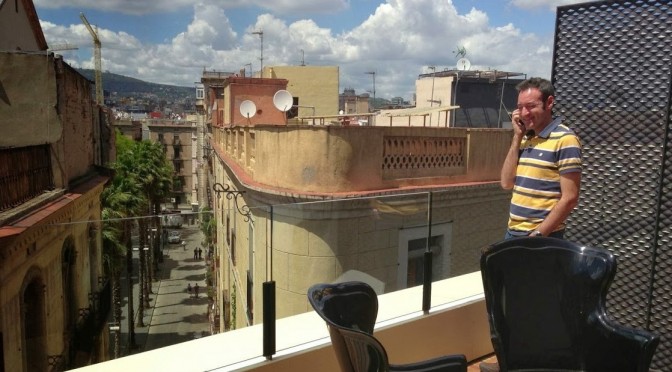 So while technically this is the next in line of the Med Cruise II pictures, the cruise was at this point ending!!!!  OH NOES!!!  Couldn’t complain about one thing and it was fantastic getting to experience the Western side of the Mediterranean versus the Eastern when we toured in 2011.  The overall feel of the cruise was slightly different this time than last time, as it felt like there weren’t nearly as many younger people to interact with compared to the first cruise, and the weather certainly was a frustrating factor at times.

Yet as a whole, the experience was amazing.  We did still meet quite a few fun and interesting people, from Doug & Harriet to our pal Dave to the random folks we’d meet at the bar or the casino that we’d see throughout afterwards.  I think we are done with going on Mediterranean Cruises for a while though, and in 2014, any trip is likely to be more focused on one or two cities that we stay in.  Tentative frontrunners are a London / France (Paris?  Somewhere in the south of France?) jaunt or maybe finally hitting up Hawaii.  From the fun we’ve had on these cruises though, it’s likely we’ll be back on one in the future.  I think what would make it a bit more fun is to go with some people we knew.  Anyway, the fact was, the cruise was over!

We had packed up our luggage the night before and left it outside, as they expedite things by moving that luggage out and placing it for collection in the port so you’re not clogging the pathways with luggage you probably can’t handle.  We had a late deportation time as we had no flight to catch and effectively had no time crunch hanging over us.  We were also getting back into Barcelona pretty early, meaning we likely weren’t going to be able to check into our hotel either.  So we first grabbed some breakfast in the cafe, during which time I got onto the Viator website on my phone and secured us a Jump-the-Line tour of the Sagrada Familia as I was NOT interested in waiting in a long ass line.  Fortunately, there was availability around 4pm that afternoon, so we had an itinerary forming as we sat there enjoying our wonderful last breakfast on the ship.

All good things must come to an end, and it was finally our turn to disembark.  That went fairly easy, and we even got to see our girls Melissa and Lacey in the really long taxi line at the port, exchanging contact info before saying goodbye.  Thankfully the taxis are pretty good and not shady, and our destination wasn’t very far from the port, as we picked the Hotel Espana, a very nice hotel about a block off the Ramblas.

View from the Equinox cafe

Back at Barcelona’s cruise port

Of course it’s nice and sunny

Waiting to leave in the dining room

Now waiting in the cab line

The taxi got us as close as possible that morning, which was a block away from the hotel as the hotel faces onto a small little walking street.  Unfortunately, our room was nowhere near ready so while we were able to leave our luggage, we couldn’t stay.  But that wasn’t a problem!  Since Hotel Espana is right off the Ramblas (the very well-known main pedestrian plaza / strip in Barcelona), we meandered over there and took in the crazy scene.  As I remembered from before, the Ramblas is like the 3rd Street Promenade but WAY bigger and WAY more crowded.  Still full of the same kinds of things though, with endless tourists, souvenir stands, restaurants, and shops.  It’s a can’t-miss thing to see.

Hotel Espana was on this alley leading to the Ramblas

Pic to remember the alley just in case

After exploring a pretty neat marketplace called the La Boqueria, the Ramblas’ sights and a store that looked like a Crate & Barrel, we decided to do the Big Bus Tours that you can hop on and off and which take you all around the city.  These are great ways to get your bearings and to at least see things that you likely wouldn’t get to on your own. Barcelona is a fairly spread-out city and the tour company had two routes, one covering the East half and one covering the West half.  We bought a ticket that allowed us to go on both, and we basically planned it so that we’d do the East Loop first, get some lunch, check in to the hotel, head to the Sagrada Familia for our tour, then do the West Loop tour.   You know what?  We did exactly that!

So the East Loop Tour starts at the north end of the Ramblas, which is where we picked it up.  You then head south to the shore, upon which you then go east along the beach, passing gorgeous shorelines and since it was sunny, it really was wonderful.  You can see the Olympic village area from 1992, as well as some of the delightful modern architecture that’s sprung up in the city.  At a certain point, you then turn back northwest and head into the heart of the city, eventually driving by the jewel, the Sagrada Familia, envisioned by Antoni Gaudi.  Larry & I didn’t get out at this point, as our tour was for later, but to drive by it is a great way to whet the appetite.  It really is a jaw-dropping structure.  More on that in a little bit when I bombard with you pics from the tour.   The rest of the tour is nice as well but it’s really just a nice way to spend some time driving through the gorgeous environs of Barcelona.  Eventually you head back towards the main strip that happens to also take you by many of Antoni Gaudi’s other architectural contributions to the city such as La Pedrera and Casa Batllo.  We visited Casa Batllo the next day, so you’ll see more pictures from that gorgeous house soon.  Gaudi’s work has to be seen to be believed, but it’s undeniably compelling.

On the 1st of 2 Bus Tours today

This tour took us around the western part of Barcelona

The back of the Barcelona Cathedral

A tower holding up the gondola

The Equinox in the distance

The two towers at Port Olympic

Our first view of the Sagrada Familia

Super immense. Inside pics come later as we didn’t get off here.

The Block of Discord ahead

Since the tour was a loop, we were right back where we started.  We weren’t sure where to grab lunch though, so as we meandered back through the Ramblas, we did try to find a place that seemed to be not at all where it was supposed to.  We did finally find a place that looked like it would be fine and we ended up having a fantastic meat and cheese platter with sangria that was just exactly what the doctor ordered.  THEN, we checked into the hotel.

HOLY COW.  The Hotel Espana was definitely a very nice way to spend a visit in Barcelona.  It’s a gorgeously restored hotel built in the 1850s with a very modern flair.  We had a room on the top floor (reserved especially because I was like, let’s just do this right) of this 4-Star hotel and the room was splendid and the view from our open-air balcony was wonderful.  It was such a relief to just have a base of operations again and to relax for a little bit.

Had to get some food – meat and cheese platter ahead

Back on the Ramblas to check in finally

At our fantastic hotel in Barcelona

The panoramic view from our penthouse room

Our room was very comfortable

The bathroom was super modern

The day was not over – not by a long shot!  But I think I’ll have to break this post up as it’s gotten ridiculously long!  Up next?  The amazing Sagrada Familia and the West Loop tour.