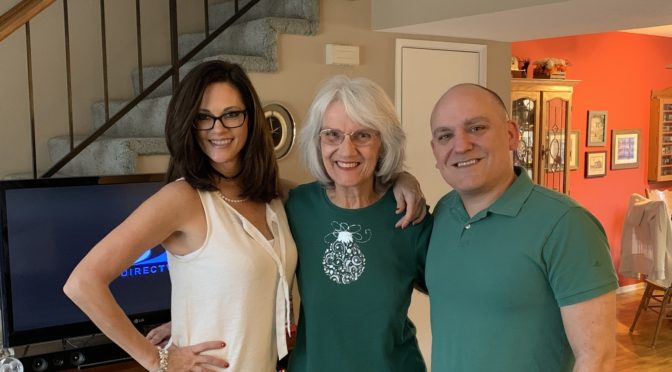 Obviously my last year and a half have been difficult, because obviously what Larry was going through and doing what we all could to fight for his survival and then make his death as comfortable as able.   There’s been another aspect of my life that has been very hard to deal with that ran concurrently with all of the above, and that’s about my mom.

Last January (in 2019), she ended up having to get fairly emergency surgery on her neck as the discs in her vertebrae were pressing against her spinal column.  It had manifested already in her having numb hands and feet, but it wasn’t sure what was causing that.   It could have been carpal tunnel and docs weren’t quite sure.   But when she went to the hairdresser and was getting laid down into the hair sink, her legs gave out as something pressed just too much on the spinal column during that action.   At the hospital, the neurologist was able to see surgery was necessary to release the pressure on her spinal cord or else much worse damage was to come.   The surgery to replace the discs and reduce the pressure was successful, although it didn’t really undo the numbness in her hands and feet.   Recovery was unfortunately necessary but it couldn’t be at the hospital, so we had to find a convalescent acute care facility for her.   Needless to say, that was a lot of stress for her.  2 weeks of that, and then she went home.   By then, she was already stressed out about her neck and head, and had a collar to keep her from moving it too much.

Going home was a whole scary event, but Stacie and I had gotten a caregiver service to be there 24/7 for her while she recovered.   Well, that basically kept her going but her anxiety and paranoia only got worse and got to the point where she stopped eating and sleeping because she was sure a piece of cheese was stuck in her throat and that if she slept, she’d stop breathing and die.   A trip to a psychiatrist got her drugs that calmed that anxiety down.  This was in March and it had been an exhausting time for all of us.

Throughout the rest of the year, instead of getting better and feeling more secure, she only got more scared about everything.   It took 2 months before she let us take the collar off her neck, which had absolutely not been necessary that long.  She refused to go upstairs and sleep as it was scary.  So she lived on the ground floor in the living room, sleeping on the couch.   She started to forget short term things, things that we had just talked about.  She couldn’t manage her own medications anymore, and wouldn’t go out with the caregivers to the store as she was afraid of falling.  She became utterly dependent on the walker we had gotten her, and her posture became the worse for wear and she wouldn’t walk upright as she was afraid she’d fall.   She stopped doing physical therapy, she stopped going upstairs at all for the shower, and she won’t watch anything but a few channels of TV as that’s I guess the only things she will watch where she won’t feel bad?   No movies, none of her other regular shows, just game show network and HGTV.

Visiting her was always bittersweet this year.   She does have memories and does know who we are.   But she’s been completely crippled by her fear, and some obsessive compulsive behaviors about food, sleeping, and moving that we are helpless to break at this point.

I’ve sped through what has happened this past year because it’s not necessary to detail the decline each day.   Who she was last January compared to now is shocking.  Stacie and I had talked about a home, but it wasn’t a giant priority at the time as I had to deal with Larry and Stacie was out of town starting her new career.   But now it’s time to act.   We visited some assisted living homes this past Friday, and found one that we both think she’ll be good in.   It makes me so sad to even realize I have to do this for someone who is only 71, but it’s no longer safe or beneficial for her to live at home and have a caregiver there.   I went yesterday, meeting Stacie there, to talk to mom about this decision.   We’d had discussions about it with her before, and of course the conversations were never great, but I think she always understood it was for her safety and benefit, even if she really wasn’t a huge fan of going.   But it’s time now.   She listened and understood, although of course you could tell it wasn’t great news for her.

I don’t really have any other options except to do this.   It will sound defensive of me to say, but fuck any of you who think this is me pawning off some kind of responsibility to give up my life and become her caregiver.  To be frank, I made a choice with Larry, and I had to do all that with him at the end.  I’m done with that.   I’m not qualified or willing to be a nurse, clean her shit, shower her and feed her.   Maybe there are others who would happily do that and to them I say god bless.  But fuck you if you think I’m now obligated to have to basically end my life doing this for the rest of what “youth” I do have.  I welcome your judgment though, and can’t wait to tell you, if you do have that thought, to go fuck yourself.   Where have you been this last year to help?  No one has been there for her, not her sisters, no one besides Stacie and me.   So yeah, get the fuck out of here if you think you’re going to judge me.

Having said that!  Yesterday after talking with mom, I left with Sveta.  She had come with me as I needed a witness for some paperwork to sign, and on the way back, we thought maybe to go grab some food.   So we went to Burger Basket, a place from our Monrovia childhoods.  Then after that, we made our way to Pasadena for a brief Starbucks stop, meandered around the Best Buy, and then drove to Michaels for some craft stuff as I’m trying to figure out what to do with me and Larry’s rings.   We then drove to Old Town Pasadena for a nice afternoon drinking at Rocco’s and shopping along the street.   We both got new sunglasses, and I got a new duvet cover for the bed, and bought some clothes at Lucky Brand.   All in all, a nice afternoon for what had been a pretty stressful week.  Then that night, I went to an absolutely hilarious improv show at the Largo called Middleditch and Schwartz.  Best improv I’ve ever seen, and ridiculously funny.

Anyway, I love you, mom, and I’m sorry what this last year has been for you.   I honestly think there’s a good chance you’ll be happy at this new place when we do this, and you’ll get some good chances for socializing, security knowing someone is always there, and just having that comfort.

Some Pictures from Saturday, Feb 29:

At our old booth in Burger Basket

Outside the long-lasting establishment

Having a drink at Rocco’s before the shopping

Me and Nicki at Largo before the show