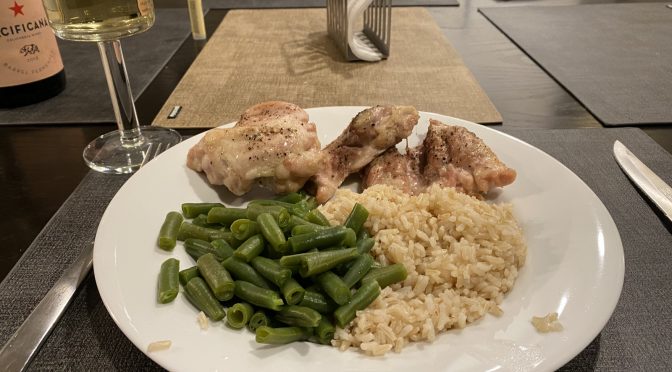 I was this close to making this a new entry in my “Larry Loved” series of posts, but I don’t have the energy to do that just yet, as honestly, a huge part of who he was was cooking, and to try to just throw a little post about me having a good cooking night isn’t fair to what should be discussed.

So instead of that, I’ll just kvetch about the fact that I’m back to having to cook and feed myself again.  I’d managed to do so before I met Larry and when I was in the military, but looking back at it now, I really didn’t do that great a job of it.   Lots of mac and cheese, lots of sorta sad attempts at chicken…and a metabolism that allowed me to make plenty of crap and not blow up to the size of a bigger Hobie.  The last 11 years though?   I got used to living it a little bit nicer with Larry’s ambitious and delicious views on cooking (and gained the weight to prove it).  He loved it.  And now I have a kitchen full of any device a reasonably ambitious cook would need.  I don’t want it to go to waste, and I actually enjoy having nice(r) meals.

What sucks about cooking for yourself is that it’s work, both in prep, execution, and cleanup.  Larry and I had split those duties up (probably not fairly, tbh – but it worked) but now it’s all me, and do I go to a ton of trouble for just me?  So I started sorta basic this week – making chicken, brown rice, and green beans.  Kind of a balanced meal, right?   I think Larry would have been proud: I found a recipe online for salt and pepper chicken in the oven, and bam, it fucking tasted amazing.  I made the rice on the stovetop and kind of found out things to do better, like keeping the heat a little higher as I still had water in the pot even after 20 minutes.  Also discovered that brown rice is better for you but certainly doesn’t taste that great.  But I gotta say, the food was overall delicious and it did make feel like Larry’s energy was with me.

A random aside:  Larry kept all his recipes in the Paprika iPad app.  All of them.  So like, it’s a total Larry treasure trove.  I did worry I’d lose them though as they’re all on what is literally like an iPad 3, so it’s supa dupa old.  If that thing died, I’d lose the recipes.  So I bought the app on my iPad, and finally figured out how to export the recipes from Paprika to the cloud, and then use my account, and re-import them.  Now I’ve got all his recipes, and I can breathe a sigh of relief as losing those would just feel like losing a huge part of him.  We had so many “go-to” recipes that I’ll one day get the motivation to make.   So between this week’s chicken combo (which I’m making again), the Instapot, and now these recipes, I think I should be able to be a functional, well-mannered man who can cook meals for others soon.  I definitely want to sign up for some cooking classes to just get confident in certain skills.  But that’s a post for another day.

One thought on “Cooking For Myself”

Mila and Ilona
View at Picasa