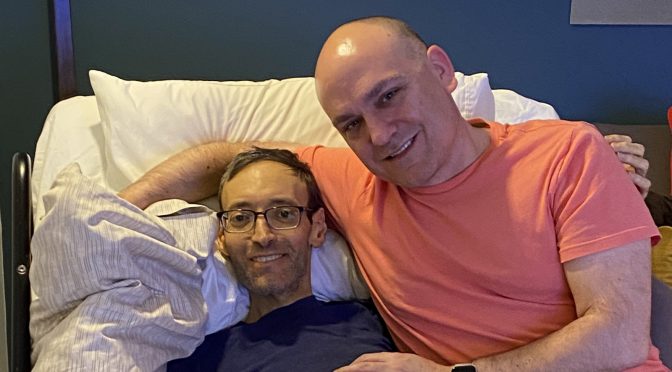 2 weeks ago, my best friend and my husband, Larry Levene, died.   After 18 months of battling Stage 4 colorectal cancer, he no longer had any more treatment options as the cancer was winning.

In the beginning of 2019, we had gone to the next stage of treatment after his first 6 months of chemotherapy, which had gone well actually with the cancer markers getting drastically reduced.  You can’t keep doing that same treatment though as the oxalyplatin in the chemo wrecks your body and causes neuropathy, which Larry definitely had.  But Zolota, the next drug you take, typically helps.  But with Larry, it was clear it wasn’t helping as his markers were creeping back up.

We continued on through May or June of doing what we could, but Dr Arzoo indicated that there was no more standard treatment available.   So we went to various other places to see what they thought.  We went to City of Hope and the doctor there basically said there really wasn’t much he could do for us as the cancer wasn’t relenting.  That was a bad day in June.  We then investigated options at Sloan Kettering in NYC, and they had an ambitious plan which Larry was a candidate for.  We’d install a hepatic pump that would pump 50x the amount of chemo right to his liver, with minimal side effects.   So we did that in August and September, but he had to stop any other chemo he was doing and he also had to recover from his surgery, which was quite invasive.  But what should have been a way to keep him stable for a few years, time for us to hope for something stronger to be developed, didn’t work.  After the first two treatments with the pump, there was no improvement.  At all.  City of Hope was where we were continuing treatment and the doctor there basically indicated that is all that could be done.

Frantic and hopeful for a miracle, we went back to Arzoo at UCLA for guidance.  He guided us to a phase 1 clinical trial that UCLA was trying.  After about 10 days on the trial, Larry had to go to the ICU as his abdomen was swelling and his liver was failing.   At the ICU, we learned the fight was over.   We took Larry home, got hospice care, and took care of him as he grew weaker and weaker, finally unable to stand or keep awake or have control of his bodily functions, and in the early morning of January 7, 2020, his strong heart finally gave up.

Just typing this overwhelms me with sadness, anger, and grief.  We all die, but Larry was too young to have to be thinking about cancer and one that was so highly aggressive.  He was only 43 when he was diagnosed – the approved age for colonoscopies in men is just recently set to 45.  Not only was he diagnosed, it was Stage 4 as it had metastasized to his liver.  We realize now that we needed a miracle for him to survive; what the treatments did do was at least give him 18 months, but without a miracle, the current treatments just aren’t enough.  We don’t know why he got this cancer.  Was it something he ate?  Something he breathed in?   Who knows.   It wasn’t genetic.  He just had the world’s worst luck, and the world now has a hole in it where he should be.  I can’t tell you how sad and alone I feel.  I miss him so god damned much it hurts.  I look at his stuff or something he wrote and it wrecks me.   It feels impossible to consider what purpose my life has at this point.  I was happy having him as my guy.   We had our life and we were happy.   I don’t want to be single and alone.  I guess I foolishly thought if we worked together and made our marriage a good one, everything else would work out.   But no, apparently fate has it that I should be alone.  My mom is no longer my mom, my dad has said I am released from being his son, my husband and best friend is dead, so all in all, it’s been a fucking hell of a year.  It’s not all bad I guess – my friends have proven to be the support I need, as well as Larry’s family, so I’m thankful for that as there’s no way I’d have made it this past year without them.  But it all just seems so fucking wrong.   He should not be dead.

I maintained a journal the last month and a half.  I’m going to update my site with those posts, so you’re not crazy if you thought I’d not been posting anything.  I hadn’t.

Below is the obituary that ran in the LA Times yesterday (Jan 19).   I loved the picture I submitted for this, and I bought 3 copies of the paper.  I plan on assembling memories of him into a box that I can dive into, and that paper will be one of the things in it.

Rest in peace, my love.   I take comfort that your suffering, as unfair as it was, is now over. 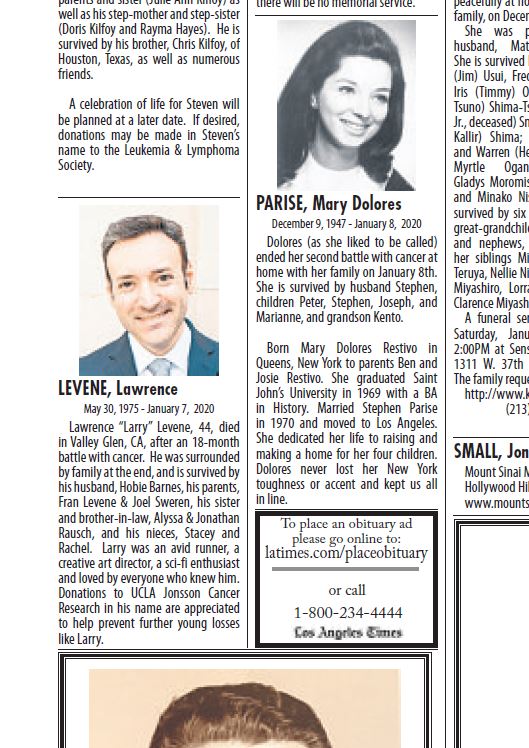