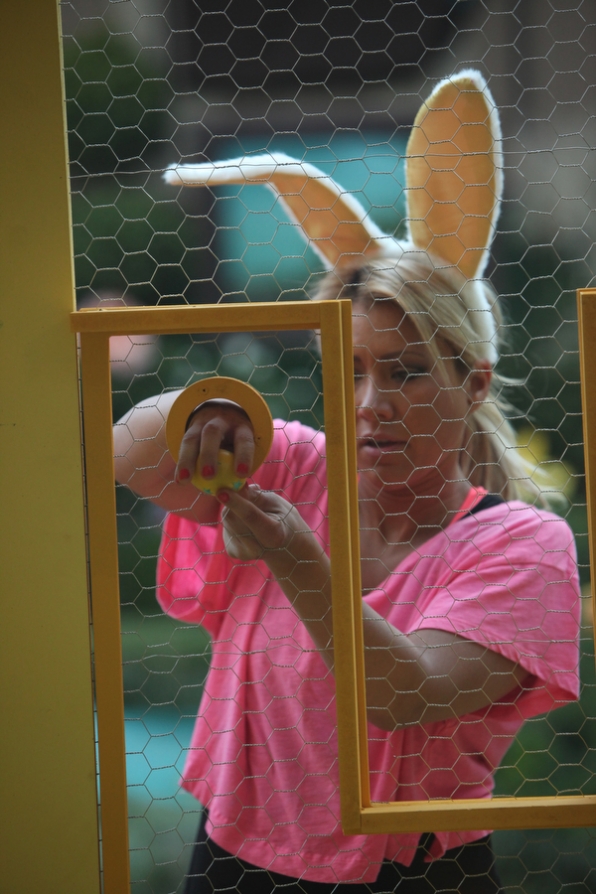 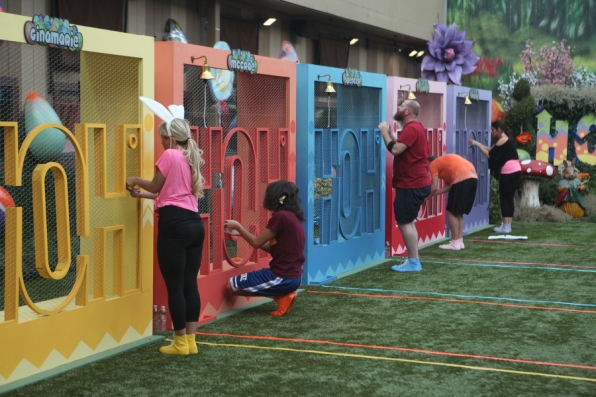 I called it, didn’t I? Â GinaMarie took a visible early lead in the HoH competition, at least what we saw of it on Thursday’s episode, and never looked back. Â Bad news for those who came in last place (Judd and Spencer) as they now got cursed with wearing a chicken suit for 48 hours, but even MORE terrible news for Amanda & McCrae.

It was clear this episode wasn’t even trying to fool us into thinking it was going to go any other way than Amanda & McCrae’s eviction. Â And I loved it for that. Â Only a few times in a reality show’s lifespan will they ever drop the pretense of “suspense” and it’s almost always at the expense of one particular contestant. Â I remember in Survivor: Amazon, which aired a LONG time ago, there was one player who everyone loathed and when it was clear he was on the way out, the show decided not to do a fake-out and instead embraced watching all the lies everyone told in order to reassure him that he was safe. Â That’s what happened this episode to “poor” Amanda & McCrae.

These two are finally on the ropes. Â There’s very little chance they will both be here after Thursday, as it seems the house has HAD IT with Amanda. Â Hilariously, Amanda was all but certain that Elissa was loathed by everyone. Â Watching poor Amanda then try to do the waterworks routine to anyone that would listen about how Elissa was sooooo meeeeaaan to her and it’s just not nice was almost painful. Â Everyone in that house actually has eyes and ears, Amanda. Â They were witness to the RIDICULOUS way you treated Elissa. Â OF COURSE Elissa is going to be a bitch back at you. Â Why wouldn’t she? Â It tooks chutzpah to try to spin it around, so I’ll give you props for that, but please, no one was going to buy it.

Surprisingly impressive was GinaMarie’s acting skills when Amanda was advising her on who to nominate this week. Â GM was doing a great job of never letting on that Amanda was the target and furiously nodded agreement that Elissa and Judd were the clear targets to take out, as no one would mind either one leaving. Â Like GM said to us in the DR, she’s sitting pretty as she’s fairly certain absolutely no one will mind either Amanda or McCrae going home. Â In fact, the whole house is all for it! 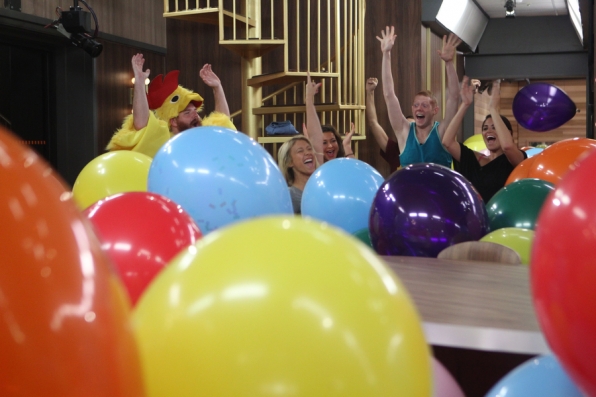 I can’t admit to being a huge fan of Pandora’s Box, but I was certain Big Brother would throw it in to the mix in order to possibly save Amanda & McCrae from eviction. Â Something along the lines of a Diamond Power of Veto allowing both nominations to be overruled, or the Coup de’Jeff power of replacing nominees at will or just generally fucking up the game to keep it “interesting.” Â For me, interesting will be what happens when one of these two goes home. Â  And let’s keep in mind that on Thursday, it’s another Double Elimination night….depending on how it goes, this dynamic duo could be wiped out in one fell swoop if the right HoH is crowned. Â It could also be vengeance-time if the remaining member wins. Â So many possibilities!

As for the Luxury competition, well, there are only so many official photos on the CBS website so that’s why it’s there. Â Yay for Spencer for winning $10K – can you imagine if Amanda had won? Â Or Elissa? Â OY.

What’s funny to me is that I forgot to mention this brand new alliance in my last BB post because it’s made up of absolute Floaters in the game. Â They may as well have called themselves the Floater McFloatertons or the FloatMasters or the Floattastic Four or Get Your Float On or something more appropriate and stupid. Â Because, c’mon, these 4 (Spencer, Andy, GinaMarie and Judd) are the EPITOME of floaters. Â Rachel must be having a meltdown somewhere because it seems almost inevitable that this is the final alliance of the season, and there’s no room for Amanda, McCrae or even poor Elissa. Â The Exterminators, as individuals, have done absolutely nothing, up till now, that was in the least bit controversial, almost always wasting their HoH to take out easy targets. Â I say “up till now” as GinaMarie did finally pinpoint the HoH power against the power duo of McCranda, but c’mon, there’s no one else left! Â I do applaud that she actually did it and so happily, but it’s not a game-shaking move. Â At all.

So I leave you with those thoughts on the game – clearly Amanda, McCrae, or in the case of a surprising Veto win, Elissa will go home first on Thursday. Â And also clearly, I hope we get many more GinaMarie speeches, as damn girl, you have serious jitters when speaking publicly. Â You seem actually pretty okay when it’s less formal (even if you do get all NY/Cheri Oteri on ’em) but that nomination speech with the repeated “dyMANic”s and the “tops the cake” metaphor butchering was pure bliss for me. Â So even though it’s FloaterCity from here on out (at least so it seems at this point), I have a feeling it’s still going to be a pretty entertaining ride to the end.