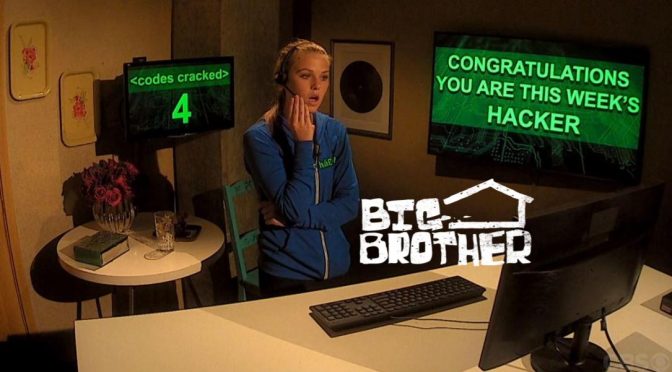 Whatwhatwhat????  Is this one of those episodes that heralded a turning point in the season???  Did HALEIGH of all people make a defining move against Tyler???   Did anything else of note happen this episode???  I think so, but not much really else mattered, so let’s get to it!

All The First Half Stuff Barely Mattered

Angela and Brett celebrated their ouster of Rachel.   Tyler, Kaycee, and JC celebrated their ouster of Rachel.  Rockstar cried some more.   Bayleigh was on a warpath and kept accusing her own alliancemates of betraying her.   How is no one seeing Tyler is a common thread here???  Is JC really that good at being devious that everyone trusts him?  None of that really factored into my enjoyment of this episode, as the BBHacker twist is what this episode was ALL about. 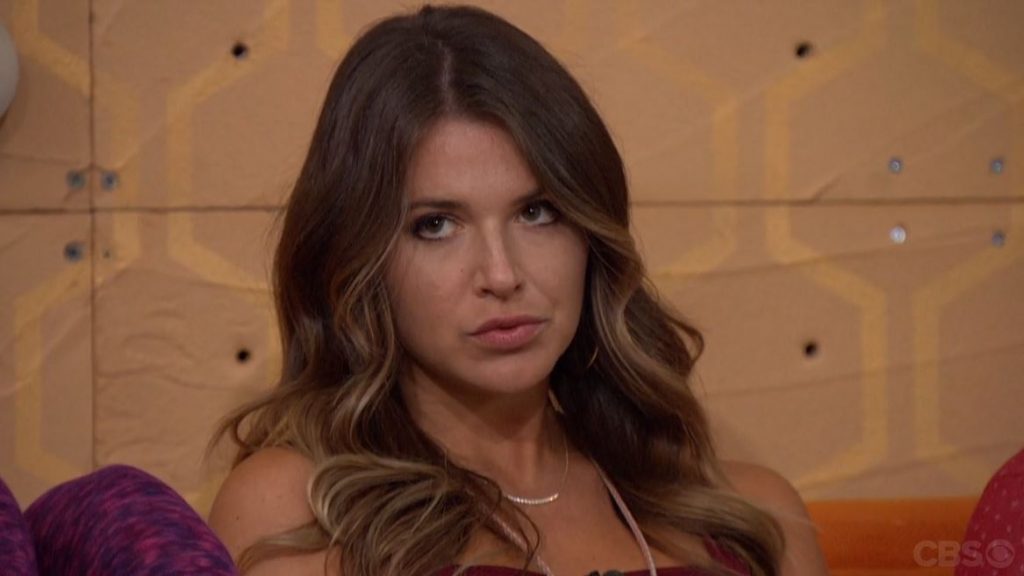 She knows what the impending announcement means to her game.  It means her HoH week is gonna be undermined by this twist if the 50/50 odds don’t go her way.  I’d say I feel bad for her, but I don’t.  She’s not coming across very well this last week or so, and maybe it’s the edit, but it certainly doesn’t seem like we’re missing her friendly side… 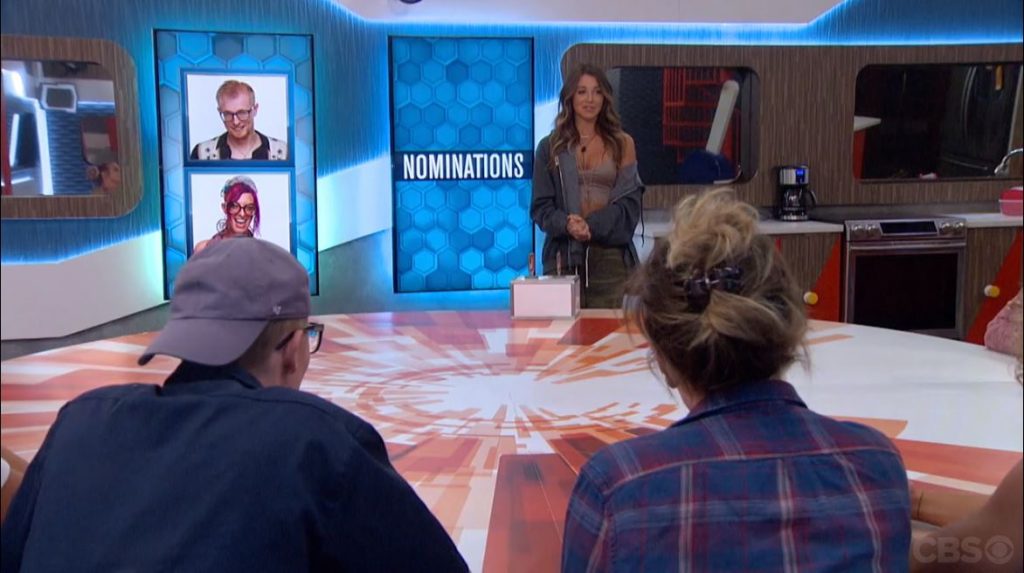 Anyway, before we get too far into the twist, we had a mid-episode nominations ceremony that went pretty much as expected, with Angela nominating Scottie & Rockstar but fully intending to backdoor Bayleigh.  And I don’t think Bayleigh has a clue.  Girl.

Welcome to the BBHacker Twist 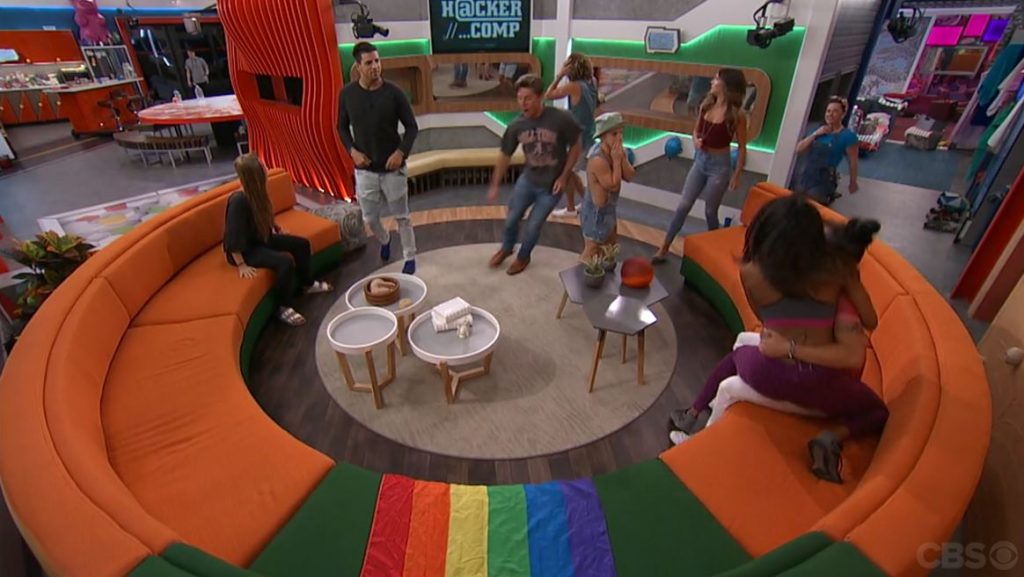 Talk about an insanely overpowered twist:

ALL of these powers in one week?   That’s CRAZY.   And the winner of the power gets to stay anonymous.  Holy shit.  Okay, maybe I feel a tad bad for Angela here, as that really does mean your HoH is likely gonna be a lame duck session.  It was at this point in the show when I started hoping that somehow someone from the other side would win this power, as otherwise it would just be a boring, inevitable week backdooring and then evicting Bayleigh. 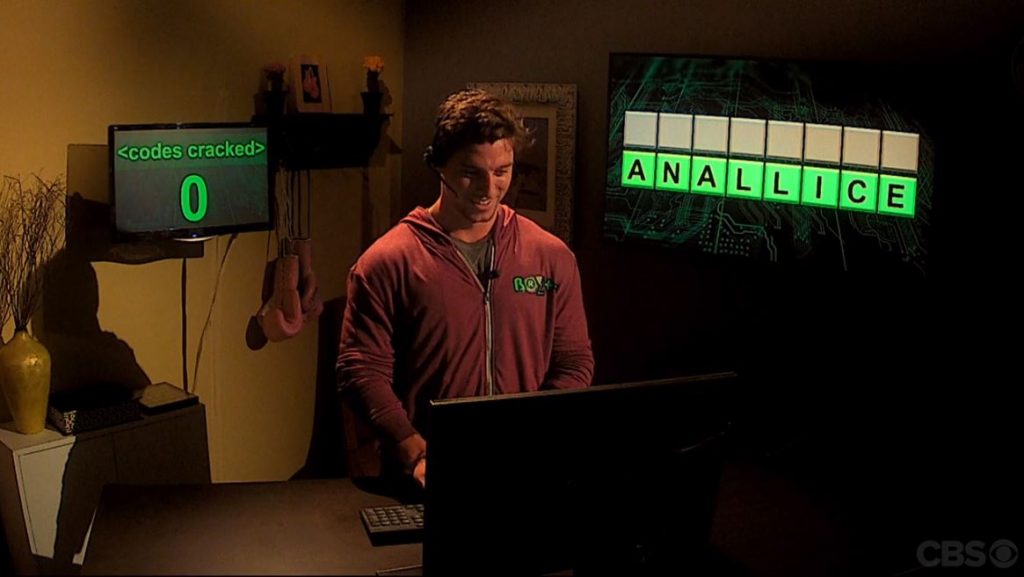 NOT Brett.  Which was hilarious.  I liked that he was fully aware that he was losing at what could have been a challenge tailored specifically for him.  Except while the theme was hacking, this was all about unscrambling words, which you could say is something an analytical mind should be able to do adeptly.  I think I got most of these while playing along at home, but not all. 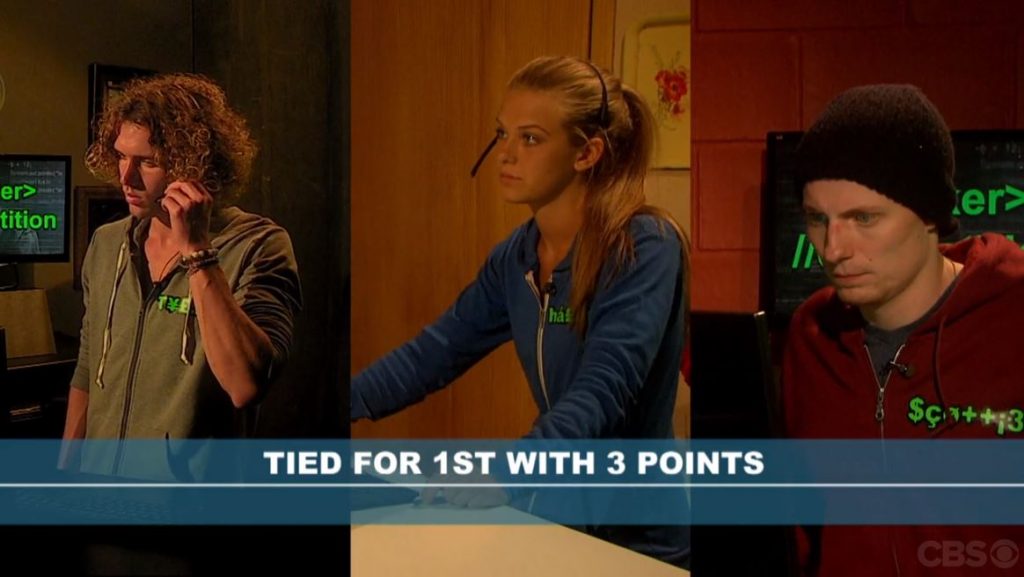 Honestly, when we got to the last round and going into it, Tyler, Haleigh, and Scottie were tied, I didn’t imagine this going any other way except Tyler winning. 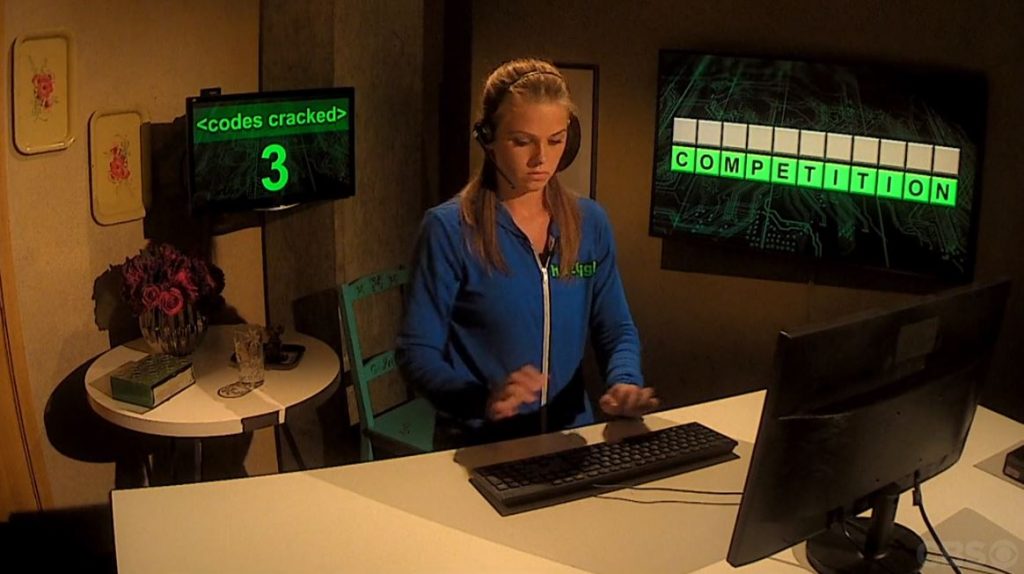 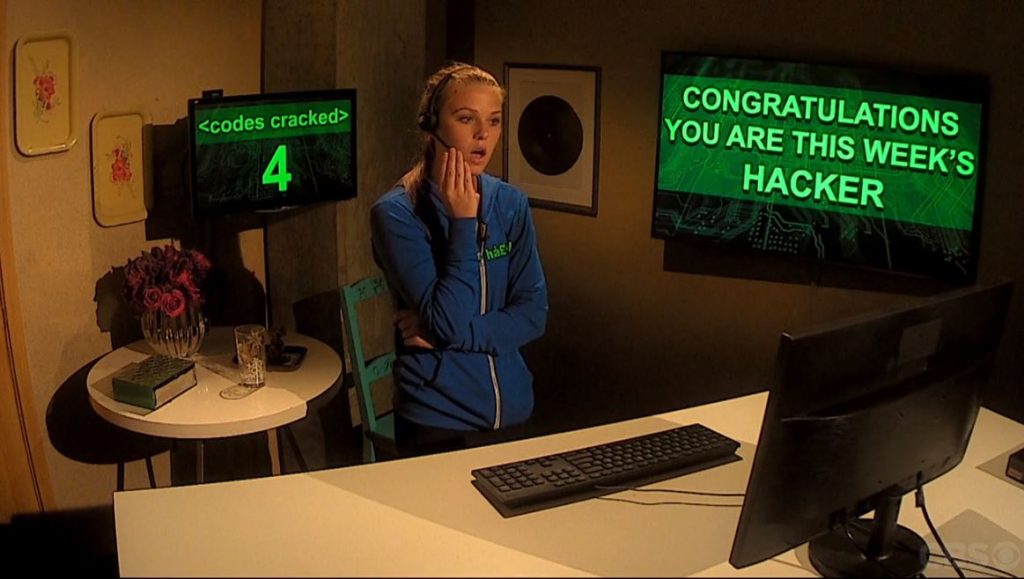 But the TV drama gods were on our side!   Freakin’ HALEIGH wins the BBHacker power!  It’s stunning.  It’s exactly what was needed, as while Scottie winning would have been just fine too, he’s an obvious candidate for being the hacker.  So Haleigh winning is just delicious.  But I still had my doubts.

The Nominations Get Hacked 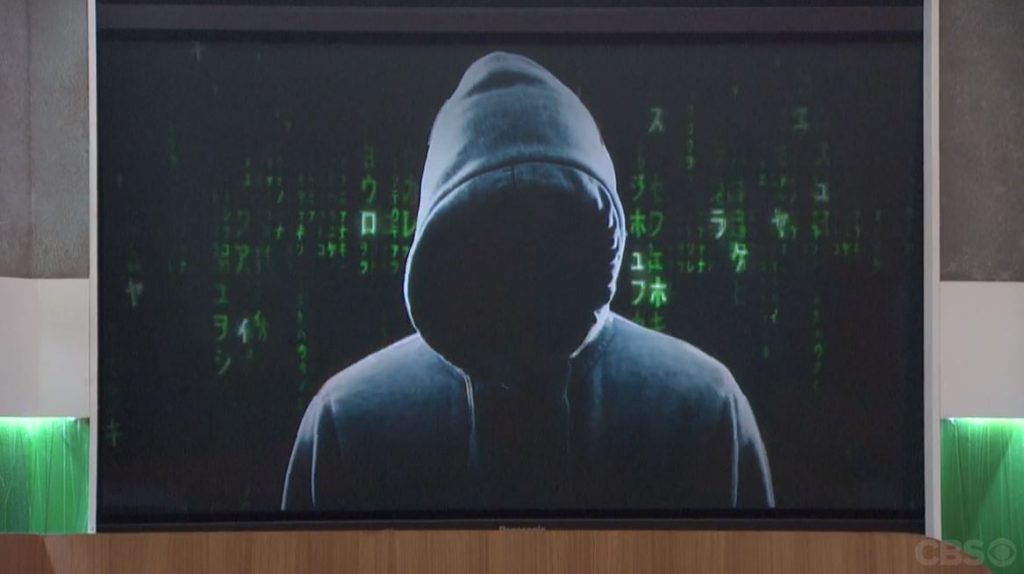 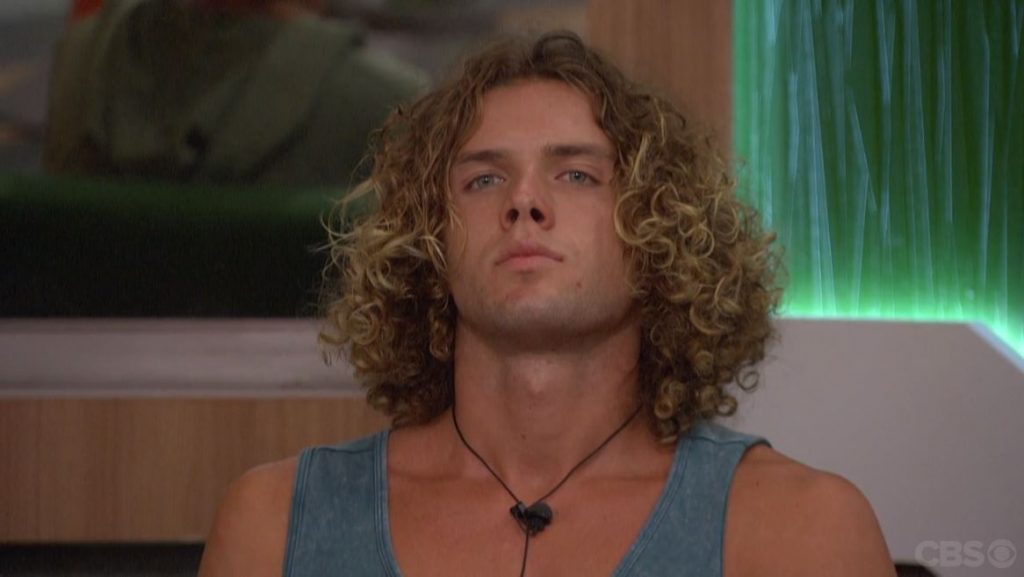 We the audience had no idea what Haleigh was going to do.   All I kept saying to Larry is that she can NOT tell anyone about this damn thing as it will get out and it’ll ruin her.  Maybe we’ll see something in tonight’s episode on if she decided to tell anybody, even in her alliance, but I REALLY hope she doesn’t.  Imagine that, keeping a secret in this house.

The BBHacker summoned everyone to the living room, first indicating that they were removing Scottie from the block.   But the tension began in earnest wondering just who was going to go up, as that would likely tell a lot about who is the hacker.  Haleigh had mentioned to us that she wanted to highlight a new target…and while I dared to dream she would take this shot, I didn’t actually expect it to happen.  Neither did Tyler!

That was fantastic.  I love Tyler’s game, but it’s been far too easy for him.  I had always wanted Derrick to hit this kind of speed bump in his season, and that never happened.  Now we see if Tyler can get through this – and that will solidify his case at the end.  But I can see this week being kind of hard with all the other powers the hacker has at her disposal.  Good luck! 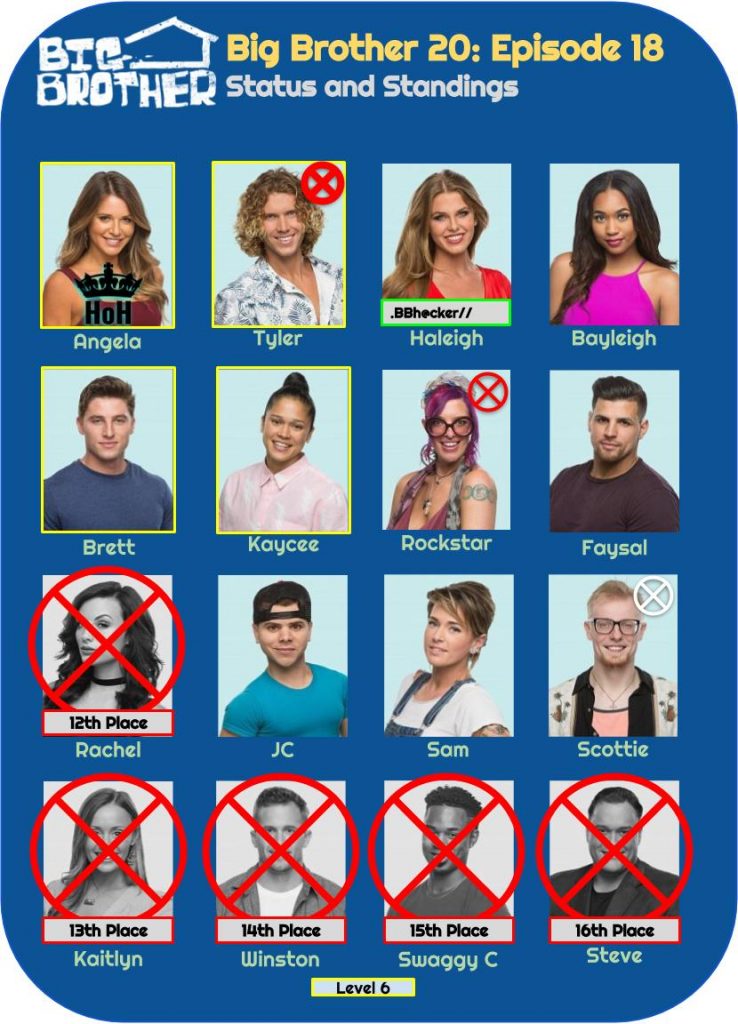 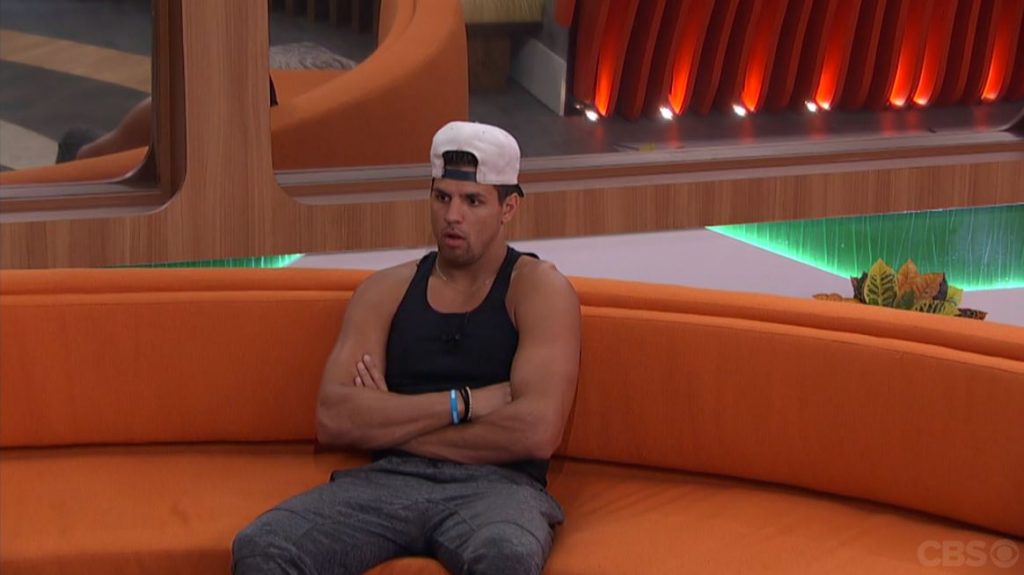 We are all Faysal.