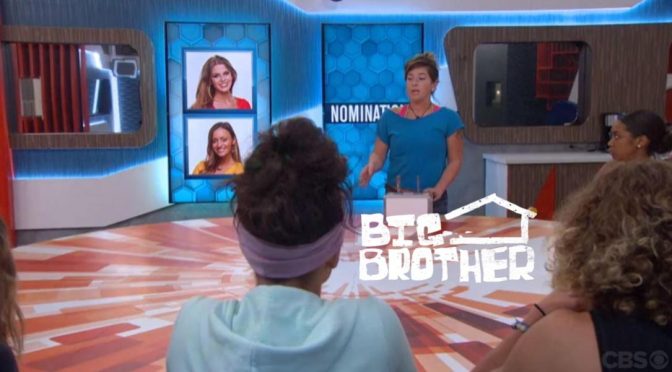 I guess we needed to finally have an episode where after watching it, you’d have to look at the person watching it with you and go, “What the fuck was that?”  As that’s what this episode was – a giant waste of time topped off with a surprising and utterly unnecessary bit of moralizing.   In other words:  FUN.

America’s Underdog Gets the HoH 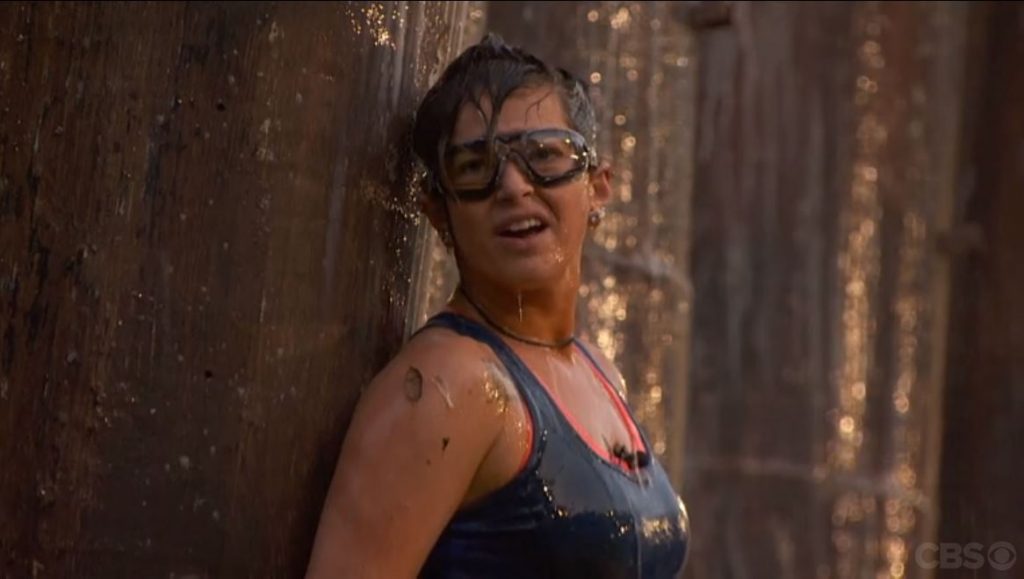 After completely unsurprising results on this endurance competition, by which I mean the big and buff fell early, the remaining houseguests up on the trees were Tyler and Sam.   She basically shouted him down to get off the platform and give her the HoH win, to which I shrug my shoulders and say, “it was effective?”  Tyler puts on a show to negotiate his safety, knowing full well he’s not in trouble, and then gives Sam the win. 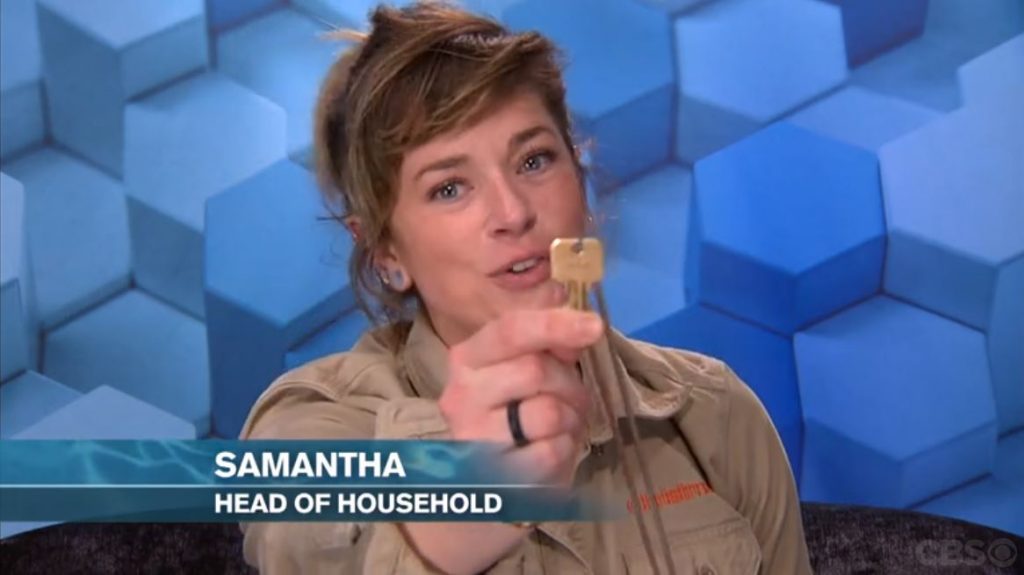 Before I had turned on Sam, I was happy for her.  Confused though, as she knows that whoever she nominates and then evicts has an actual chance of getting back in the game.  SO WHY PUT THIS BLOOD ON YOUR HANDS UNNECESSARILY?  As unless you’re telling these people that information at the get-go, and who knows, maybe she has or will do so, you’re making enemies.  And hooo boy, she certainly does, but we’ll get to that later.

There is of course aftermath to Winston’s eviction.  But it was all shit we’d seen before and only served to highlight the idiocy that seems to be happening in the house. 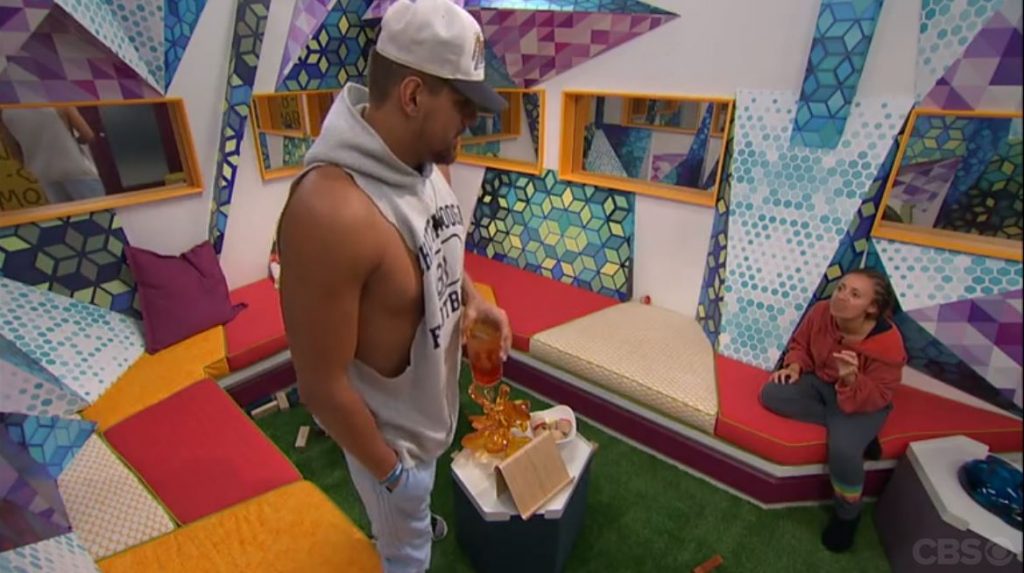 First we have Faysal utterly perplexed by what happened at the vote.   He doesn’t know who to believe.  That’s because he’s stupid and easily led around by words people say.   He is tied to both Kaitlyn and Haleigh, but apparently doesn’t seem to trust either one of them at all.  So yeah, he’s got that going for him.  But he does trust what everyone else (Tyler, JC) is telling him, which is that Kaitlyn is the flipper. 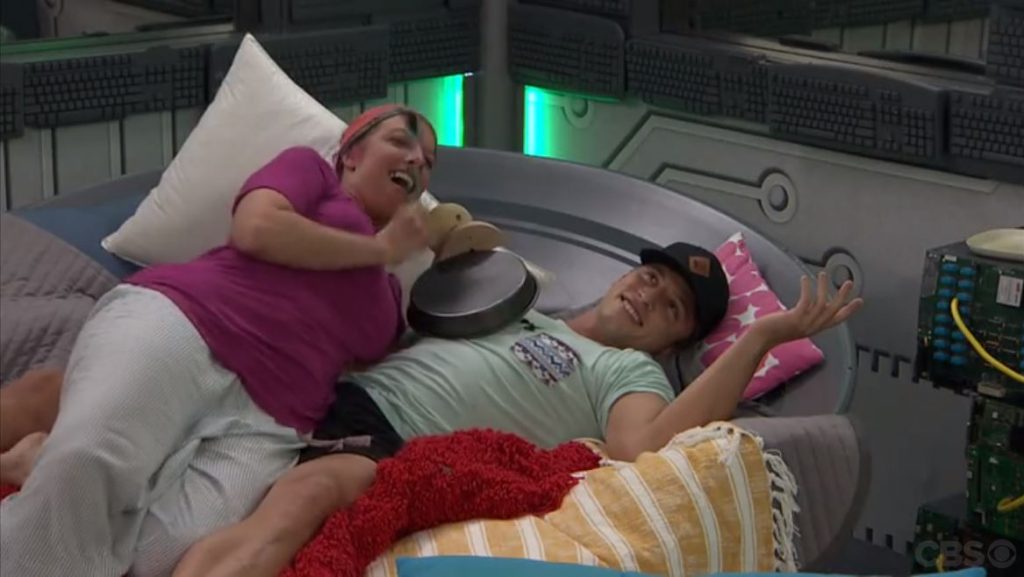 Then Rockstar took a page out of the Josh (BB19) playbook and started harassing Brett by banging on a pot.  <sigh>  I mean, I thought it was a stupid ploy when Josh did it last year, but he had a crucial thing in his favor:  Paul and Christmas as actual allies.  Rockstar does not have that behind her, and as Brett points out, is only making herself more obnoxious.  Maybe her allies have power, but if we’re counting Haleigh, Bayleigh, and Kaitlyn as her allies, then that power base seems to be on the ropes right now.  Eh, who knows.  It’s just another of those things that are “this again?” 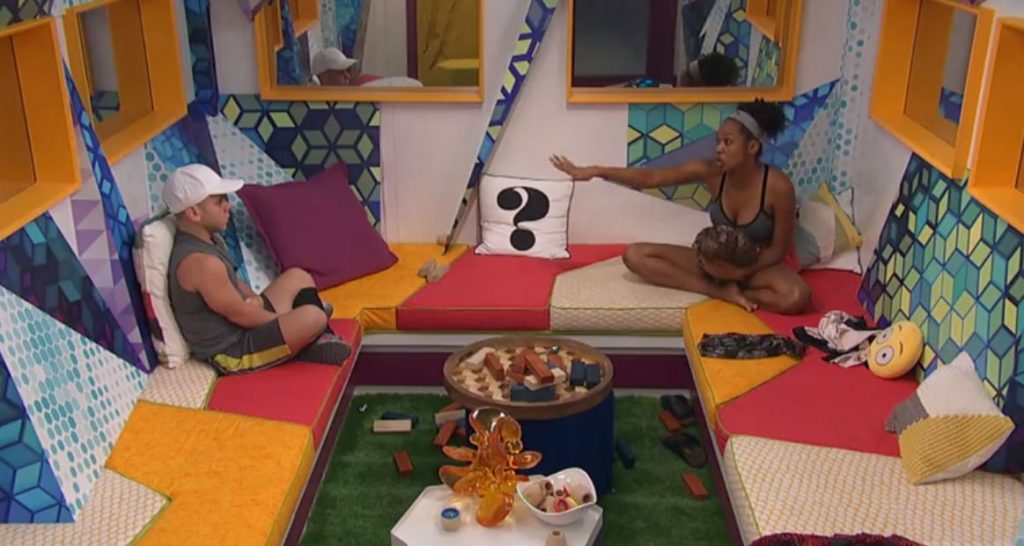 And last in this grouping of stuff that I’m like UGH about is JC and Bayleigh discussing offensive words.   This went on for WAY long and they kept repeating the same points.  Repeatedly.   I honestly was on Bayleigh’s side on this in that her use of the word that offended JC was to ask an actual question about it, while he just flat out used the n-word itself instead of couching it as the “n-word” and omg I’m just going to stop.  Let’s just not use the offensive words, houseguests?  You can communicate very easily without getting offensive.  Do so.

Last But Certainly Not Least, We Have the nu-Sam 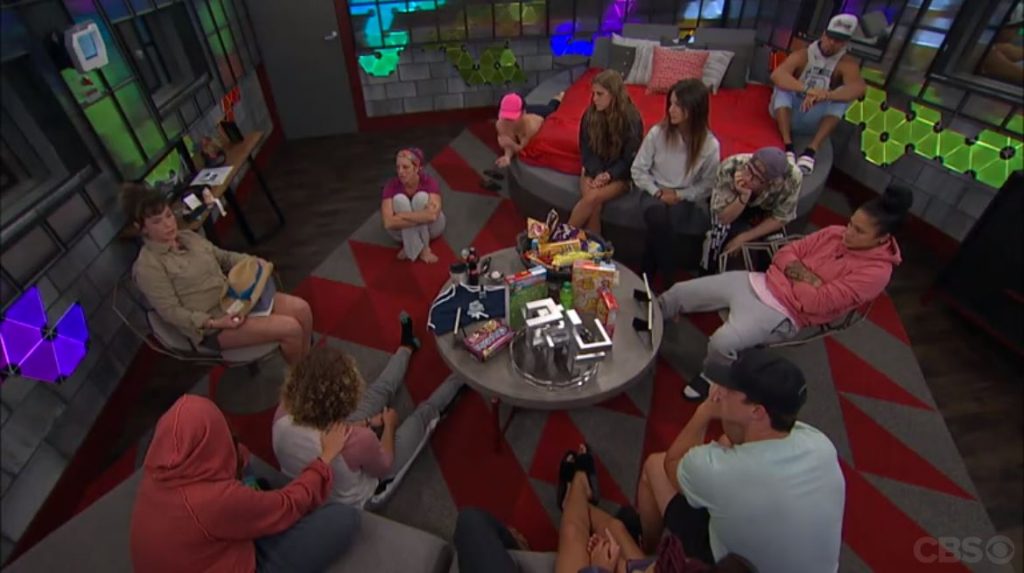 We also get to see Sam laying down the law effective immediately: 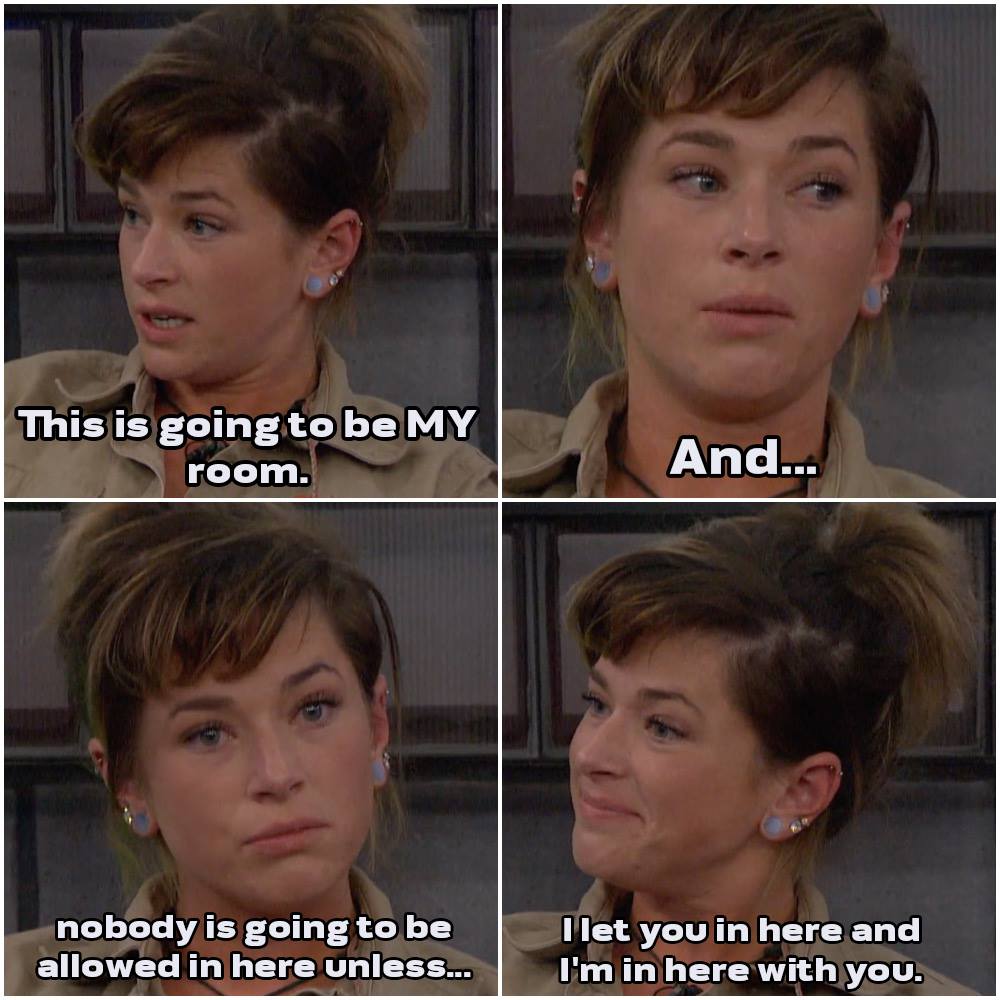 I borrowed that image from the Big Brother Facebook group as it is definitely a new approach to being the HoH, across many many seasons.  It was like a big WTF to everyone there.  Now honestly, I’ve always been surprised to see houseguests in the HoH room and the HoH isn’t there.  But it seemed to be part of the game – be cool about using it and sharing it with the others.  Sam wasn’t having that.  And I respect that.  Surprising still though, as people aren’t going to forget that.

But my main issue with Sam was when she made her nominations – as in addition to the HoH Room Policy she dictated, she also indicated there was to be no one-on-ones with her or any campaigning as she already had made her mind up.  UmmmmWHAT?  That is kind of the point of the game?  To talk about it?  Let’s get to nominations then.

Nominations, with a dose of Moralizing 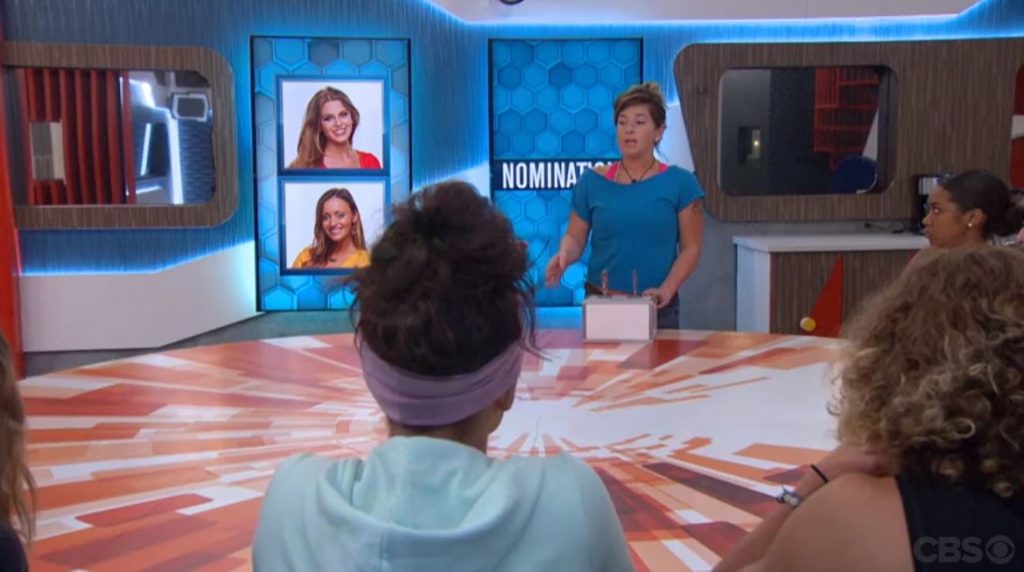 It wasn’t a surprise to see she nominated Haleigh and Kaitlyn.   I could have told you that Kaitlyn was a long-time target after Kaitlyn was kind of a bitch to her while she was Sam the Robot.  And I guess Haleigh was guilty by association.   But oh no, we actually get some more… 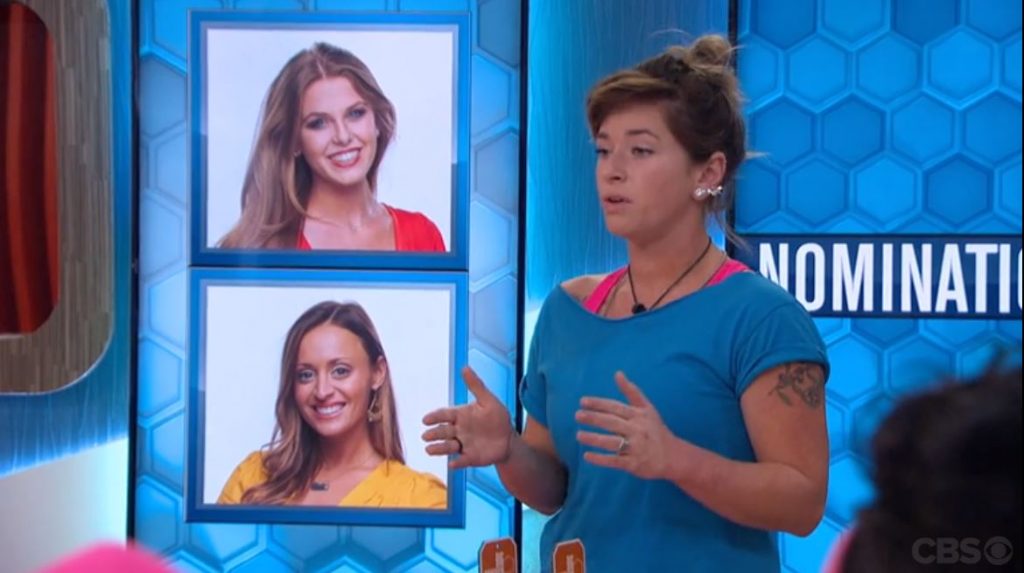 …as you see, Sam has had it with the way these girls are just using their feminine wiles on these poor boys in the house.   The girls have no self-respect and are playing a cheap game.   The boys also need to get some self-respect and play a better game.  What in the everluving fuck is she talking about?  Flirting and friendship has and always will play a role in this game.   Is it fair that some of the more attractive girls and guys get an edge just by that?  No – but that’s the game.  And usually that backfires anyway.  So to start getting all judgy up in here?  Bish, please.  I’m off the Sam train at this point.  Good luck with this approach, girl – you’re gonna need it.  As regardless who goes out the door this week, THEY ARE VERY LIKELY COMING BACK AND YOU KNOW THAT!!!!

Why do this?  Why?  Say it’s a strategic decision and leave it at that.  Of course they’re not going to like being on the block, but that’s the game.  But to make it suddenly personal?   Now you’ve made actual enemies of these two women and made everyone else realize you’re playing a different game.   So I am interested to see how this shakes out today.  Here’s to Kaitlyn and Haleigh – knock the tears off and get to work.  And you’ll likely be here next week to get your revenge on this really stupid play by Sam.  SMDH. 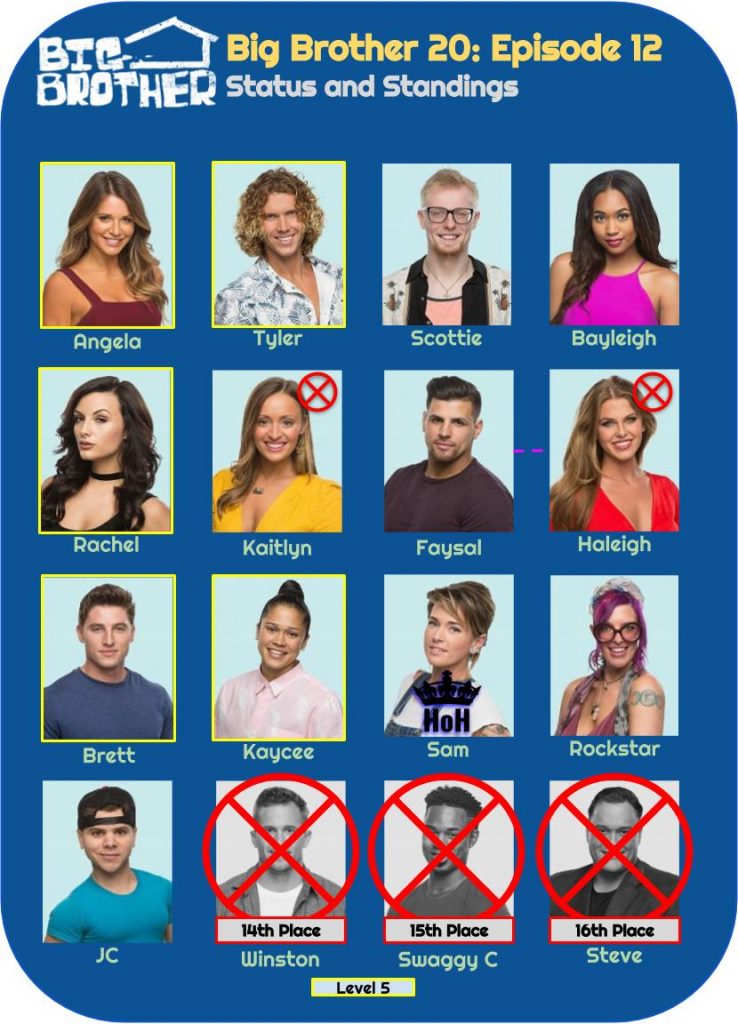 I don’t even know if I like any of these people right now.   Fix this situation, Big Brother, as everyone kind of sucks at the moment.