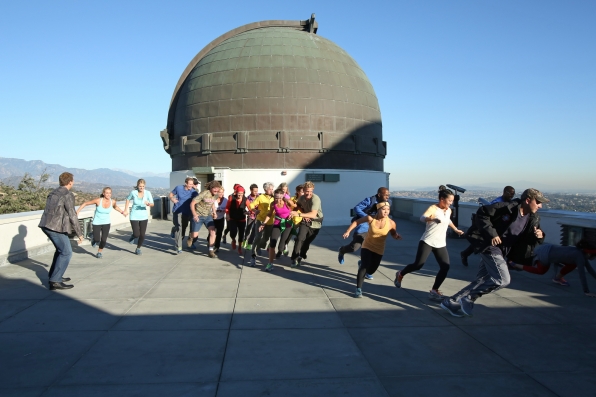 YAYYYYY!!!!  One of my favorite shows has returned for its spring season: The Amazing Race!  If you have no idea what this show’s concept is, it comes down to 11 teams traveling around the world to various Pit Stops, encountering challenges along the way known as Detours, Roadblocks, and more – if you come in first at a Pit Stop’s leg, you typically win a prize and rest safe in the knowledge you won’t be eliminated.  If you come in last for a leg?  You’re likely going to be eliminated from the race, although sometimes a leg is deemed “non-elimination” and you remain in the race, albeit now you have a penalty Speed Bump to overcome.  There used to be penalties like losing your bags or all your money, but it seems the producers didn’t like contestants begging!  You’re now caught up, so let’s get to this. 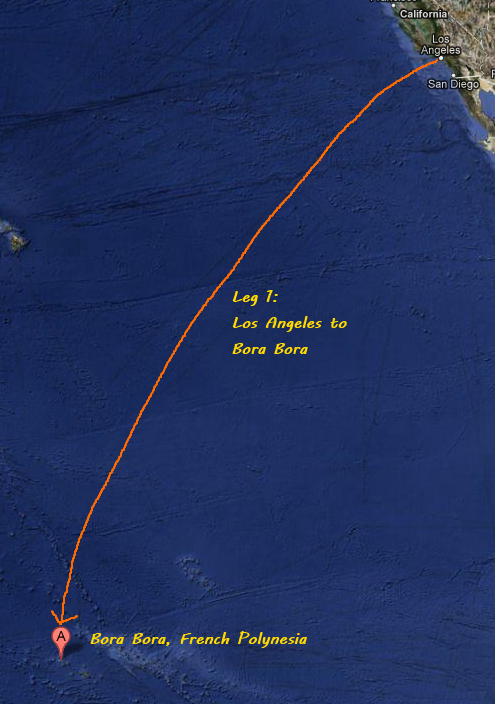 The show has been fairly consistent, recently, with starting the race in LA, yet it’s always a mystery where the race will end.  They started it at Griffith Park Observatory in Hollywood, which is a place I’ve been just once long ago when I was in elementary school.  Upon seeing it on TV, I was reminded that Larry & I really need to go visit some of these awesome places with amazing views, including the observatory and hiking to Hollywood Sign.

Anyway, we got our mandatory introductions to the teams and their assorted sob stories or motivating tales.  Frankly, I couldn’t care less about these stories anymore.  What am I (and by extension, Larry) looking for?  WHERE ARE THE HOT GUYS?

The Hotness Rundown, as of Leg 1:

Yes, I’m shallow, but damn, that’s a huge aspect for my enjoyment along with the beautiful (and not so beautiful) locations they travel to.  Last season, there were freakin’ Chippendales.  This one?  Oh boy.  These casting directors need to be fired.  The only ones who kind of have potential are the hockey guys (Anthony & Bates), but then they open their mouths.  DEAR GOD.  It’s not that they say crazy shit – they have missing gaps in their teeth.  MISSING GAPS.  In this day and age, one would think you could buy some falsies as you ARE on TV.  Then there’s a very gay guy (Joey, of Joey & Meghan) who is extremely twinky in his appearance and I’m sure if he carried himself in a slightly hotter manner, I’d be into it.  But oh no, he’s full on queen and certainly one of those you’d see in a gay bar being Supreme El-Bitch-o.  The guy (John, of John & Jessica) who is on the winning team for this leg would have potential, but then his mouth swallows his face.  His mouth is enormous.  ENORMOUS.  There’s also a married couple, but let’s not kid ourselves – the guy (Max, of Max & Katie) suffers from serious gay face.  He’s not kidding anyone.   There are also twin doctors (Idries & Jamil) but they really aren’t my type – but we’ll see if they grow on me.  If their personality improves, I could be swayed.  Finally, the eliminated team, a team of Firefighters (Matthew & Daniel) (c’mon, this one should have been a no-brainer – when is there such a thing as less-than-supremely-attractive firemen on television?) were NOT HOT.  They ended up being kind of stupid too.  That’s not always a total deal breaker, but in this case, not a winning combination.

Back to a Semblance of a Recap:

Before starting the race, Phil explained the rules as well as the fact that the winners of Leg 1 would not only win an Express Pass for themselves but an additional one to give away before the end of Leg 4.  This feature is a bit better than the “$2M surprise” from last season which had absolutely no chance of succeeding.  Here it is a bit more strategic along with the chance to cause some drama.  Everyone loves drama, right?

Phil starts up the race, and the racers bolt for their belongings and a Ford Fusion (product placement!) as they drive themselves to LAX.  Surprisingly, the southern yokels (Chuck & Wynona) got there first.  Hmm….may have to reconsider their worthiness, but that hair of Chuck’s is RIDICULOUS.  I beg for a Fast Forward that requires him to shave it off.  There are two flights to Bora Bora, the first destination of this race.  BTW, if we weren’t already booked for a cruise, I would so be ready to travel to Bora Bora.  HOW AMAZINGLY GORGEOUS IS THAT PLACE???  The first flight can take 5 teams while the second flight will take the remaining 6.  That first set of 5 then enters into a pact while they’re waiting for their connecting flight a little bit later – they pledge that whoever wins this leg will then give the second Express Pass to whoever of this group comes in second.  NO POSSIBLE DRAMA IN THE FUTURE, IS THERE? 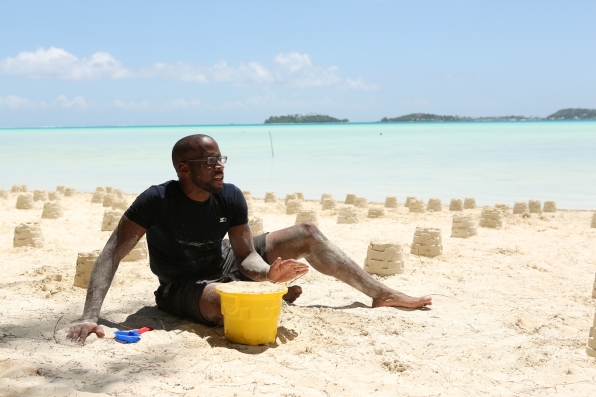 Once in Bora Bora, the teams have to run and sign up on a roster in order to determine who gets to participate in the Roadblock first.  This Roadblock is basically go sky-diving from a helicopter which is hovering 10K feet above the LUSCIOUS blue water of French Polynesia.  It brought to mind my sole experience going tandem skydiving – not sure if I ever want to re-do that experience.  It was exhilarating, but seriously, when you’re that high up, jumping out of a plane can seem kind of stupid.  After that though, the real fun begins, as the second Roadblock requires whoever didn’t jump out of the plane to look for the next clue within 400 sand castles.  You must rebuild the sand castle after destroying one if you don’t find the clue within it.  UGH.

Much like a needle in a haystack, this challenge ends up taking forever for pretty much all the teams.  The second group of 6 teams actually manage to catch up to the first group of 5.  After what seems like forever, BigMouthJohn & Jessica finally escape when she finds the clue.  They have no problem then assembling the outrigger canoe which they paddle a mile to the neighboring island, where Phil rewards them with the Express Pass x2.  We’ll see if that deal they agreed to sticks. 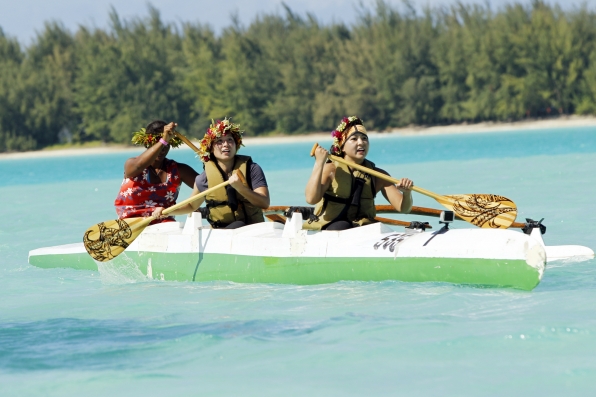 Back at Sandcastle Beach, the other teams plow through, although frustration mounts when some in the first group get overtaken by lucky 2nd group members.  The CancerSurvivors David & Connor are the second team from the 1st group to make it to the Pit Stop, although still only 3rd because the Hockey Players overtook them.  Finally, 6 more teams end up finding their clue and making their way to Phil, while 3 teams linger:  GayFaceMax & AntiSocialKatie, Blondies Caroline & Jen, and Firemen Matthew & Daniel.  It’s been literally hours now and these three teams still haven’t managed to find a clue.  Devious Max & Katie propose to the others still there that it’s hopeless, so let the chips fall where they will.  All three teams agree to take the 4-hour penalty incurred by quitting the Roadblock challenge and letting a canoe race to the Pit Stop determine who stays.  The Firemen figure they’ve got this in the bag and take an early lead in the canoe race, but immediately capsize.  The other two teams leapfrog them and never look back.

So it’s adieu to the Firemen.  If they were hotter, I’d be more sad. Â As it is, I don’t really care.  With regards to early favorites of mine, I’m leaning towards relatively hot Hockey Players as well as the Asian friends Pamela & Winnie.  I also like the Roller Derby moms, Mona & Beth.  We’ll see how long these first impressions last after I discover these teams are all batshit insane.  Here’s the scoreboard for now: