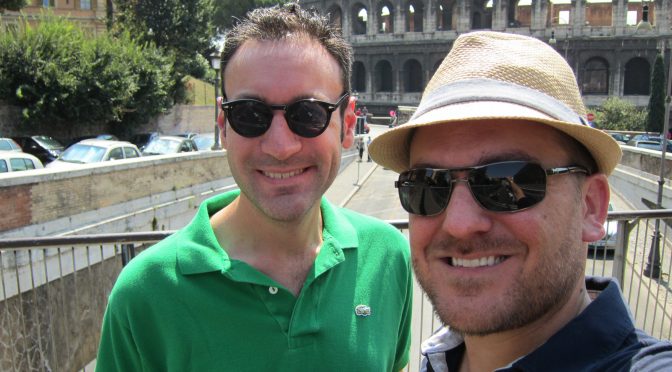 On Thursday, August 25th we left early in the morning from LAX.  We took a Delta flight to Atlanta, but when we arrived it took us a while to get off the plane. Ended up having to haul ass from terminal T all the way to terminal E. Had just enough time to get to our gate and fit in a bathroom break. We were some of the last to get in and a woman had sat in our seats hoping to sit next to her hot boyfriend and swap seats with one of us. Sorry lady. We paid the extra to have Economy Plus and sit together for the next 10 hours.

Hobie at LAX too

On our way to Atlanta

Somewhere over the US

Us on our way to Rome!

Economy Plus is wonderful – free drinks!

It ended up being a great flight but very hard to fall asleep. So at 8:30am when we got to Fiumicino, we were still kinda exhausted. Customs was non existent and the guy humored us when he stamped our passport. We easily found the route to the Leonardo Express train that takes us into Rome. Got our tickets and ran to one of the cars very far down the track as it was already loading when we got there. Me and my four bags managed to get in the train but it was hard. I hate all those bags.

The train into Rome was surprisingly fast and before we knew it we were at Roma Termini, the main train station in Rome. After we got out of the train, I guided us incorrectly out the station towards the south side of the train station. Oops. It was fucking hot and humid and we ended up walking all the way around the station’s west end to get to the north side where fortunately our hotel was nearby, the Best Western Hotel Royal Santina. Luckily we were able to check in at around 10:30 and we got in, showered and changed clothes and headed off to our first destination, the Colosseum. We ended up walking to Termini as I knew that we could get our Roma Passes there at a tabacchi shop. Sure enough, that was easy.

Arrival in Rome and Walking to Colosseum

Happy or delirious Larry at the Rome luggage claim

Hotel Royal Santina presents us with options in the restroom

The shower that seems to be missing doors

Roma Termini, where the Leonardo Express dropped us off from the airport

Looking south on our way towards the Colosseum

We then schlepped down the streets of Rome from the hotel to the Colosseum, and it was fucking hot. Hot. I took us on a left a bit too early up some steps and to a bridge over the road we should have been on. So as we could see the Colosseum, we couldn’t get to it. Finally found some stairs down where we could cross the street to it.  As we were looking around the outside of the Colosseum for the entrance, one of those enterprising folks who sell tours caught us and asked if we wanted a tour. I was initially hesitant but the price didn’t suck.. So we got a guided tour of the Colosseum with not that great of a guide. Whatever it was still cool although it was ungodly hot.

Ah, there is the Colosseum

First of many self-portraits this trip in Rome

Me and the Colo

Not the only ones there

Larry is having none of it

Our tour group and guide

Mosaics representing what went on here

Inside the Colosseum at Level 2

It was hot that day – so walking in the sun sucked

You can see the edge where they kept the “floor” on

Umbrellas are smart, as are hats. See me later.

The Temple of Venus and Rome

Larry wisely in the shade

Hatted Hobie in the sun

The Colosseum is huge

The Arch of Constantine

Self shot in the Colosseum

Angle from the floor

So many potential assassin perches

Where the Emperor’s box was

Where the folks can look into the catacombs

Me, on my pedestal, in the shade

After the 45 minute tour was over we had some time to walk around ourselves so we did and I took plenty of pictures. After 20 minutes of freedom we then met up for the second part which was a guided tour of the Forum and the Palatine Hill. We got a great female tour guide who was much more compelling. Very good tour of the Palatine Hill area and lots of great history stories, including the she-wolf/prostitute who raised the abandoned Remus and Romulus. The ruins of the palace are quite derelict but you can imagine what they must have looked like in their prime. Also got some invaluable advice during this tour applicable for the rest of the tour: you can freely drink the water coming out from the many fountains in Rome. Thank god as it was hot and water is not cheap in this world. So if you have a bottle you can constantly fill it up for free. Sweet.

The Forum and Palatine Hill

Entry to the Palatine area

Our wonderful tour guide for the Palatine, in the shade!

A view of one of the ancient Roman aquaducts

The Emperor’s private stadium in his palace – nice

Looking towards the sunken stadium

The Museum and also one of Mussolini’s “palaces”

St. Peters in the distance

Where the once-lush gardens and piazzas were

I am a fan of the trees

View from the Palatine into the ancient Roman Forum

Me and a hat and the Forum

Looking towards the Campidoglio from the Palatine Hill

That’s the old Roman Senate building down there

Best fact ever – the Roman fountains all around the city provide safe drinking water. AWESOME.

The ruined Basilica of Constantine

After the tour we wandered through the Forum a bit until we veered north out of the Forum area and found a place to eat a block or so from there, not the best but we were hungry. We then walked back to the hotel, uphill and in the heat, and when we got back, we passed t promptly for our first siesta. Ugh. Many hours later, we got up for dinner, which we dressed a little up for. It was around the hotel area and it was great, plus there were very hot waiters. We ate a lot but it was good. After that we went back to our hotel and passed out.

Our first Roman dinner – Larry was most pleased

Can’t remember what I had – but it was good

Where we ate – you can’t see the hot waiters though. HOT.

My artful (drunk) picture of Larry through the wineglasses

A view of our hotel while walking back